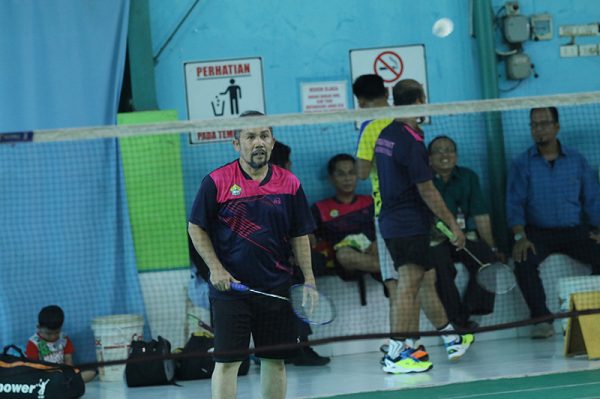 unri.ac.id The male pair team of the Rectorate of the University of Riau (UR), in the badminton tournament for the 55th UR Anniversary, won I, II, and III Places after defeating the opposing team in the final match at the Panam Sports Hall (GOR) Square , Pekanbaru, Thursday (28/9).

The Chancellor defeated the opposing team through the pair of Azhar Kasimi and Mardian. In the deciding match, Azhar managed to beat the pair Hengki and Fadli with a score of 21-15 and 21-13.

“Actually, young people have the wrong strategy. They just play hitting, playing smash . So we no longer need to run around chasing the ball and blocking smashes , just returning long balls, so this condition is very advantageous for us to beat the opposing team," said Azhar Kasymi when met by the UR news team on the field.

For this victory, Azhar and colleagues admitted that there was no special training in participating in this tournament. However, with the regular sporting capital of badminton that he does to maintain healthy stamina, it turns out to be able to prove the importance of exercising.

“We are very grateful that at the age of 50, we can still beat an opposing team that is still relatively young. However, we really appreciate their enthusiasm to compete,” said Azhar, whose daily life as the Head of the UR Academic Bureau shares his views.

Previously, each winner in the group competed with each other for the position. In group A, team pairs Azhar Kasymi and Mardian, Team Eko and Jondra, bent the knees of pairs from Hengki and Fadli, and Aci and colleagues from the UR Faculty of Economics in Group B.

“We had predicted that the rectorate team would be able to qualify for the final. We judge, the defeat of the opposing team is due to a lack of emotional control in the match. Therefore, the Rectorate Team managed to win in each match set,” said Burhan, one of the observers of this tournament commented.

"We hope that the spirit of champion and sportsmanship can continue to be echoed in every element of the UR academic community who is directly or indirectly involved in every implementation of a series of activities, to enliven the 55th UR Milad in 2017," said Burhan. (believer) ***